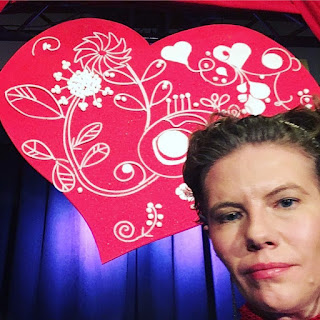 Get ready for the extraordinary. If you want to donate, and I think you should, there’s an opportunity to donate even $1!

https://www.seedandspark.com/fund/the-great-now-what
But I know how you are. You want to be sure she’s worth it. Trust me. She is. Here’s Maggie Whittum’s story, in her own words, and you can decide for yourself:

I always wanted to get on stage at the Denver Center. Growing up in Steamboat Springs, it was a trek to get to Denver, but my parents really valued the arts, and made a point to bring me to the opera, the ballet and the theater. When I was 10, we made a special journey down to see The Tempest in the Space Theatre. The show was exceptional and has lived on in my mind for decades.

I thought I was going to be a professional actor, director and producer. I studied drama at Colorado College and spent much of the next seven years living abroad. In 2005, I was lucky enough to perform in a successful one-act comedy at the Edinburgh Fringe Festival. I would return to this for the epic festival in Scotland for the next three summers. In South Korea, I got to appear on a quirky Korean children’s television show. I started an improv group there that still exists. I directed several shows and worked consistently as a voiceover artist.
I was blessed with so much. But living abroad had its drawbacks, so I came back to the U.S. in 2011.

I made some inroads with Denver theater companies. I specifically remember seeing The Diviners by Phamaly Theatre Company in 2011, and being extremely impressed.
I spent a year as a producing and directing assistant at McCarter Theatre in Princeton, New Jersey, then came back to Denver for another year. Then set out to get my MFA in acting at the Academy for Classical Acting at the Shakespeare Theatre Company in Washington D.C. It was an intense and enriching program. I spent all day studying Shakespeare, scansion, stage combat, Alexander Technique, dance, voice and speech. I loved every minute of it.
Then, two days after the first semester ended in December 2014, I got a headache. Forty-eight hours later, I checked myself into the George Washington University emergency room. Two days after that, things significantly worsened. I was put on a ventilator, the left side of my body and right side of my face were paralyzed, and I had kaleidoscopic double vision.
I had suffered a massive stroke.
Terror is the word to describe it all. Piece by piece, my body stopped working. I could no longer move. I could no longer speak. I could no longer breathe. Thirteen days after that initial headache, I underwent a nine-hour brain surgery at Johns Hopkins Hospital. It was a success. I could breathe on my own again, and I went to a rehab hospital.
I thought I could get back all the things I had been before the stroke. But just as my body had crumbled before, my life crumbled after. I had to drop out of school. My engagement ended. I was not able to work for a very long time. I recognized, about nine months after my stroke, that I was now permanently disabled.
I moved back to Denver feeling destroyed and ashamed. But once I was back in town, I made a point to see all of the Phamaly productions. When I heard they were doing the musical Into the Woods, I was absolutely thrilled. I mustered up the courage to audition in January, despite having a paralyzed vocal cord. I was delighted to play Cinderella’s Stepmother.
When I finally stepped onstage at the Denver Center, it was a considerably bittersweet experience. Of course I wanted to be there, but not under these circumstances. I deal with a lot of chronic pain now, and many vision issues, but it was tremendously rewarding and validating to step on that stage and perform again. I got to make people laugh. I got to be a part of an extraordinarily talented ensemble. I got to feel seen again.
Phamaly is an extraordinary company, and I feel fortunate to live in a city where a company like that can thrive, because it wouldn’t be the same if I lived in Miami or Seattle. I can’t wait to see their newest show, Harvey, now playing through Nov. 11 at the Olin Hotel in partnership with Senior Housing Options at 1420 Logan St.
Into the Woods was a major step forward in my life. I am now creating a documentary film called The Great Now What about my experience with stroke and disability. With the support of other trauma survivors, I hope this will be a film about how creating theatre and art together can inspire a community to heal and connect with empathy, compassion and humanity.
Art heals pain.
Editor’s note: Maggie Whittum’s fundraising campaign for her film will be launched on World Stroke Day on October 29. Click here for more information (there’s only a short window until November 26)
To summarize:
Steamboat Springs native Maggie Whittum is a Denver actor who has appeared in A Midsummer Night’s Dream (as Puck) and Into the Woods (as Cinderella’s Stepmother) for Phamaly Theatre Company. Previous theatre directing and producing credits include All in the Timing, The Zoo Story and The 25th Annual Putnam County Spelling Bee. She has directed and performed in Scotland, Colorado, South Korea, Taiwan, Hong Kong, Beijing and throughout Canada. She also assistant directed under Tony award-winner Rebecca Taichman at McCarter Theatre in Princeton, where she was named the Charles Evans Fellow in 2012.
Now Maggie has a new project, a movie:

This will be an important and impactful documentary film.

Another writer claims: Maggie has it all: brains, beauty, an education, a fiancé, and plans for a family. Then a rare stroke (caused cavernous angioma) shatters her identity, leaving her permanently disabled and with intense chronic pain, a paralyzed face, major vision issues, and more. She leaves school, loses her body, her voice, her face, her vision, her man, her money, her ability to work, and nearly — her mind. She links up with other disabled artists and performers. Creating theatre and art together, they inspire a community to heal and connect with empathy, compassion, and humanity.

Maggie says, “We have BIG GOALS. Eventually, we hope this film will be featured at major festivals, like Sundance and Telluride, and will stream on HBOGo, Amazon Prime, or Netflix (It’s very important to us this film is available via online streaming to people with disabilities who cannot leave home easily.) We are proud to say that The Great Now What has been chosen as a “Featured Project” by the Denver Film Society. We are being considered for several prestigious grants, and this crowdfunding campaign will help us meet funding goals, as well as grow awareness and enthusiasm for the film!”
Here is the way to donate:
https://www.seedandspark.com/fund/the-great-now-what
Much appreciated! We are at 67% of our goal!

Our $41,000 goal is the bare minimum needed to to complete a film that we are proud of and can release online.

If we raise $50,000, we’ll be able to create much more elaborate and compelling motion graphic animations to communicate life with chronic pain!

If we raise $60,000, we’ll be able to hire the very best marketing and promotional team to help us reach as many stroke survivors, people with chronic illness and chronic pain, caregivers, and people in the medical community as possible!

“If we raise $70,000, we’ll show the world that people with disabilities are not invisible! We’ll have more leverage when negotiating with distributors, and we’ll be to acheieve a bigger platform and have a major (worldwide!) impact!

“If we raise $250,000 we’ll be able to create the best film possible, reach the widest audience possible, fund all of our post-production costs, AND fund all our film festival entry fees, distribution costs, promotional travel, marketing, audience outreach, and make the most powerful and deeply empathetic film that will impact stroke survivors, people with chronic illness and chronic pain, people with disabilities, caregivers, the medical community, and so many more!
“If you are interested in making a tax-deductible donation or investing in The Great Now What, please email us at: [email protected]. Let’s discuss!”

OTHER WAYS YOU CAN HELP

1. FOLLOW US ON SOCIAL MEDIA!
Like our page on Facebook for daily posts about the film, and relevant articles, podcasts, and pictures on disability, stroke, chronic pain, facial paralysis, cavernomas, and more! Encourage your friends to like us too!
2. SPREAD THE WORD ABOUT #TheGreatNowWhat
Tell you friends, family, colleagues, and neighbors about the film – in particular, we want to reach stroke survivors, people with chronic illness or chronic pain, people with disabilities, and members of the medical community. Share our posts, campaign page, and our backer updates! Tweet about us! Here is a sample Tweet!
Join #TheGreatNowWhat #crowdfunding campaign; help make this powerful #documentary #film on #stroke #disability a reality!
Contributions can be sent to: http://www.seedandspark.com/ fund/the-great-now-what
3. JOIN OUR MAILING LIST!
Stay up to date on the film – click here to join – we won’t spam you.!
4. KEEP FOLLOWING OUR CAMPAIGN!
Regular visits to our Seed&Spark page keep you in the know AND increase our chances of being featured on the site!
I know most stroke survivors don’t work anymore, with no money coming in except Social Security. But there’s always a dollar that you can contribute to this remarkable effort. Maybe more. There are almost 800,000 people who have strokes every year, and that’s America alone. If everyone contributed a dollar…. You get the gist.

Joyce Hoffman is one of the world's top 10 stroke bloggers according to the Medical News Today. You can find the original post and other blogs Joyce wrote in Tales of a Stroke Survivor. (https://talesofastrokesurvivor.blog)
[email protected]
http://talesofastrokesurvivor.blog
Previous post To Boldly Go Where No Insect Has Gone Before: Fuckin’ Fungus Gnats
Next post Stroke Survivors: Three Recent Studies on Fatigue That Tell How, Who, And What Respectively