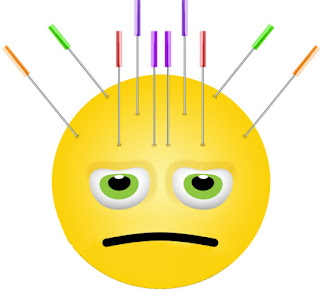 A year ago, I spent some time telling my story about acupuncture after the stroke in an ego-centric moment. Chronic pain is a  bitch. Less pain now but still super
annoying.
(https://stroketales.blogspot.com/2018/04/acupuncture-it-isnt-for-faint-of-heart.html). This post, also about acupuncture, is radically different, and deals with the myths as well as the pros and cons about the ancient art.

The is from Harvard Medical School, written by Daniel Pendick in 2013, who says, “Chronic pain in the muscles and joints can make life miserable. Standard treatments like ice and heat, anti-inflammatory medications, physical therapy, and appropriate exercises can often ease the pain. But when they don’t, acupuncture is an option with a good track record that’s worth considering.”

He goes on to say that there has been significant debate about acupuncture and its effectiveness for chronic pain. A  team of researchers studied the results of 29 different  studies involving nearly 18,000 participants. They concluded acupuncture relieved pain by roughly 50%, reported in Archives of Internal Medicine.

Acupuncture is virtually painless when done by an experienced practitioner, inserting hair-thin needles into the skin at various points. The purpose of the needles is to correct imbalances in the flow of energy called qi (pronounced “chee”), and “is thought to ease pain by affecting neurotransmitters, hormone levels, or the immune system,” says Pendick. “Acupuncture treatments range from $65 to $125 per session.” The acupuncturist usually takes a 3 or 4-year graduate degree covering all aspects of this Chinese medicine that include Chinese Herbal Medicine, Tui Na (massage), Tai Chi/Qi Gong (movement), and Chinese Dietary Therapy.

The Cleveland Clinic sponsored this 2014 article by Jamie Starkey, LAc (meaning Licensed Acupuncturist) in which she explores 10 myths surrounding acupuncture.

Fact: Although we use needles, they are very slender and fine (about the size of a cat whisker). You may or may not feel an initial prick, sometimes described as a mosquito bite. Any discomfort will either fade on its own or ease up as your acupuncturist adjusts the needles. You should experience a Qi (pronounced “chee”) sensation, often described as heaviness, throbbing or an electrical sensation. That’s your body’s healing energy doing its work

Myth 2: Acupuncture is ancient folk medicine; no legitimate healthcare professional would recommend it

Fact: Acupuncture is a treatment option that many medical institutions recommend. Even the United States military uses acupuncture. The National Institutes of Health (NIH) funds many clinical research trials on acupuncture. Both the NIH and the World Health Organization (WHO) recognize acupuncture as a valid treatment for a wide range of conditions.

Myth 3: Most people who use, or practice, acupuncture are into ‘New Age’ healing

Fact: On the contrary, you probably have a friend, coworker or neighbor who receives acupuncture treatments.

Fact: There is no conflict between acupuncture and conventional medicine; they complement one another. Acupuncture works nicely as an adjunct to your conventional treatment plan.

Myth 5: Acupuncture is only useful in treating pain

Myth 6: Acupuncture has a lot of side effects and you’ll need time off work

Fact: Acupuncture has few to no side effects. After your acupuncture session, you can usually carry on with your day without any restrictions.

Myth 7: Acupuncture’s effects are psychological. It doesn’t really do anything

Fact:  Acupuncture and its effects are far from psychological. Studies show that during acupuncture, our brains begin to release chemicals such as endorphins (natural painkillers) Acupuncture also has an anti-inflammatory effect and helps people’s immune system.

Fact: For most conditions, acupuncturists strive to improve your main problem so you do not have to return for more treatment. For chronic conditions, some people stay on a maintenance schedule, however, such as returning once a month, because acupuncture continues to help.

Myth 9: If you do not see results in one or two treatments, then you’re unlikely to benefit from acupuncture

Myth 10: You’ll need a doctor’s referral or a prescription for acupuncture

Fact: Guidelines vary by state. In the state of Ohio, for example, you do not need a doctor’s referral or prescription for acupuncture, but a physician should perform a diagnostic exam  for the condition you plan to treat. It is important you seek out a qualified and medically licensed acupuncturist before starting any course of treatment. [I found in Oregon that a doctor’s referral or a prescription is not needed, too].
Kim Hennessee, L.Ac. wrote about a year ago, “Originally acupuncture needles were not made of stainless steel but of stone, bamboo and bone. Today’s needles are extremely fine in diameter (about the thickness of two human hairs) and are sterile and disposable.

“Acupuncture is highly individualized; for example, if 50 people with the common cold received acupuncture, all 50 people could have different acupuncture points chosen as part of their treatment.”

The World Health Organization released a report, Acupuncture:Review of Reports on Controlled Clinical Trials, which endorses the use of acupuncture for over 200 symptoms and diseases including low back pain, headache, nausea/vomiting, allergic rhinitis, depression/anxiety, side effects of chemotherapy and induction of labor.

Hennessee continues, “Acupuncture gained attention in the U.S. after President Nixon’s visit to China in 1972 when an accompanying reporter experienced significant post-operative pain relief after undergoing an emergency appendectomy and wrote about the benefits of acupuncture upon his return to the U.S.”

And this from the American Academy of Family Physicians (AAFP) in 2018:
“One therapy that has received considerable attention for the treatment of chronic pain is acupuncture. In an update of patient data meta-analysis published in the researchers with the Acupuncture Trialists’ Collaboration concluded that acupuncture is effective for the treatment of chronic pain, that the effects of acupuncture persist over time, and that the benefits of acupuncture cannot be explained away solely by the placebo effect.”
Jennifer Frost, M.D., medical director for the AAFP’s Health of the Public and Science Division, said, “Many family physicians are open to ‘alternative’ therapies such as acupuncture. Most insurance plans don’t cover acupuncture, which significantly reduces access.”
But the bottom line? “It’s important that family physicians become aware of which professionals provide high-quality acupuncture in their area to ensure patients receive the best care.”
In another lengthy article on acupuncture, written by an unknown source who identifies himself Fallacy Man, he gives us pause to think that acupuncture is a cure-all. He is the “con” in the debate.
Posted on January 14, 2019 (thelogicofscience.com), Fallacy Man says, “Acupuncture is based on pre-scientific mysticism. It is supposed to work via the manipulation of acupoints, but scientists have been unable to find evidence that acupoints actually exist (i.e., they are not physiologically distinguishable from other points on the body.”

He adds, “There is no known mechanism through which acupuncture could work. Nevertheless, thousands of tests have been conducted. Meta-analyses and systematic reviews of these tests are extremely inconsistent, with little agreement among them. Many analyses failed to find evidence that it is better than a placebo, while others found a significant difference. However, the positive results usually had very small effect sizes, suggesting that the results were not clinically significant and were likely statistical flukes.”
Calling acupuncture “prescientific malarky,” he disdains inserted needles into “acupoints” along “meridians” that correct the “flow and balance.” He also says the literature, i.e. studies, surrounding acupuncture is a “messy one,” full of “fanciful tales without having that data to back them up.
“How likely is it really that poking needles into the skin can relieve pain, cure infectious diseases, help with childbirth, treat gastrointestinal problems, etc.? It doesn’t make sense based on everything else that we know,” he says.

But nowhere in Fallacy Man’s diatribe does he say dangers exist for acupuncture. Just anecdotal references that may not have acupuncture at fault at all.  No deaths from acupuncture, the supporters cry out!

So my conclusion is this: If the chronic pain keeps you from enjoying or concentrating or resenting the life you have, give acupuncture a try, or exhausting your chronic pain options as you cross acupuncture off your list as a failed experiment.

Joyce Hoffman is one of the world's top 10 stroke bloggers according to the Medical News Today. You can find the original post and other blogs Joyce wrote in Tales of a Stroke Survivor. (https://talesofastrokesurvivor.blog)
[email protected]
http://talesofastrokesurvivor.blog
Previous post 10 Things You Should NOT Say to Somebody Who Is Depressed for Whatever Reason and What You Should Answer All the Time
Next post You Are What You Eat: 10 Top Brain Foods

One thought on “Acupuncture Cures What Ails You? “Fallacy Man” Produces Quality Points That Give You Pause”