In 2011, The Huffington Post reported this story: “A Black Friday shopper who collapsed while shopping at a Target store in West Virginia went almost unnoticed as customers continued to hunt for bargain deals. Walter Vance, a 61-year-old pharmacist who reportedly suffered from a prior heart condition, later died in the hospital. Witnesses say some shoppers ignored and even walked over the man’s body as they continued to shop. Friends and co-workers, saddened to learn of his death, expressed outrage over the way he was treated by shoppers. Lynne Vance [Walter’s wife] said six nurses shopping in the store came to her husband’s rescue and performed CPR until paramedics arrived.”

This wasn’t the only incident to put America’s biggest shopping day in a bad light. There were more, and these are some of the horrific 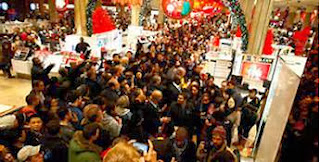 highlights: In 2006, a man shopping at Best Buy was recorded on video assaulting another shopper. In the same year, raucous Walmart shoppers at a store outside Columbus, Ohio, quickly poured in the doors when the store opened, plastering a few employees against stacks of merchandise. When the crowd rushed to grab gift certificates that had been trickled down from the ceiling, nine shoppers in a California mall were injured, including an old woman who had to be rushed to the hospital.

In 2008, two people were fatally shot during a fight at a Toys ‘r Us in Palm Desert, California. In 2010, a Wisconsin woman was arrested as she cut into the line outside of a Toys ‘R’ Us store, and threatening to shoot other shoppers who tried to voice their opinion. On Black Friday 2012, two people were shot outside a Wal-Mart in Florida during a dispute over a parking space. I remember those incidents and more.

Every year, Black Friday (the term originated in Philadelphia) inches a little closer to exterminating Thanksgiving by the stores opening earlier and earlier, taking a bigger bite out of Thanksgiving. I mean, THANKSGIVING, that wonderful time of year when the whole family gets together to show off their kids and tell everybody how prosperous their lives are. (At least, it was so in my family). It’s all a sham, but don’t mess with tradition. Traditions are what keeps families together, at least according to the advertisements.

We once went to Black Friday while we were visiting my son in Pittsburgh. We arrived, my son from Boston and I, at a Best Buy store 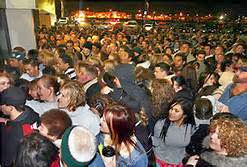 at around 3 am. The store was opening at 6 am. The one from Pittsburgh said we were nuts to go. We stood out there in sub-freezing temperatures to buy a bargain GPS. But, hey, Black Friday has come to be a tradition, too. But with all that pushing and shoving once the store opened, I vowed I would never go again.

That was ten years ago. And now, I had a stroke to contend with, but I never go out alone and it was 11 am. I thought about Black Friday again as I was going to get my nails done, not the death of the pharmacist but Black Friday in general.

“Hey! I always love a great challenge! Do you want to stop by the mall on the way to just see what everybody’s buying?” I asked.

My aide looked at me, and her look wasn’t at all good.

“Really? You want to go shopping with those lunatics?”

I didn’t have to be a rocket scientist to know what she was thinking. 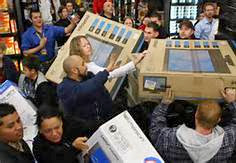 We were now two blocks away from the mall.

“‘I’m just sayin’. I want to go in and get the experience all over again.” I was in the mood to do, not think.

This time, the aide didn’t look at me. She didn’t speak either. She just drove, but she took me in the mall direction. Despite the heavy traffic, like some foreboding sign of crowds-soon-to-appear, I went right on.

“The mall’s right over there,” I pointed. We had a block to go, and it took us 9 minutes to go one block, or converted to travel time, 1.5 miles an hour. (That’s what I do a treadmill).

Anyway, when we arrived at the mall, she couldn’t find a parking place. In fact, there were cars parked where parking spaces weren’t. The thought of the pharmacist who died and the woman who used pepper spray and the fatigued Target worker in the canal and the assaulters and the shooters all came back to me in one collage. My brain was on overload. I changed my mind but didn’t admit it. Besides, I knew she wouldn’t get back in time before my time with her was up.

She broke out into a smile, the first of the day.

Joyce Hoffman is one of the world's top 10 stroke bloggers according to the Medical News Today. You can find the original post and other blogs Joyce wrote in Tales of a Stroke Survivor. (https://talesofastrokesurvivor.blog)
[email protected]
http://talesofastrokesurvivor.blog
Previous post The Invaluable Hearing Aids, aka Me? Wrong? You Betcha!
Next post David Letterman, New Year’s Resolutions for a Stroke Survivor, and Other Things