Skip to content
General
Spread the love
I broke my big toe on a cutting board that had fallen from a pile of stuff. Please. Don’t ask. Imagine whatever you’d like.

That was in October 2013 and I quit going to the gym, and naturally, what I had gained gym-wise was depleting rapidly. In November, I went to rehab in Pittsburgh, where I was visiting my son, and the therapist phoned the rehab doctor, known as a physiatrist (I always love to say physiatrist because people always think, as a result of my  stroke,  I’m mispronouncing psychiatrist and they think I’m going to a shrink–sorry to disappoint), who said that 2 or 3 weeks in the rehab in-patient facility (rehab 4 to 5 hours every day of the week) might prove to be not such a bad thing.

He was serious, and he said to come back Monday for a solution. I mean, I couldn’t just check in to a hospital for rehab without his help, but ironically, something happened to make it so. 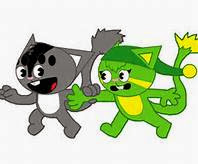 my cousin came to visit for a week. Do you know what the Ancients said about visits? Visits are like bad fish. Stay for more than 3 days and they’ll both end up stinking. I don’t know about that analogy, but her stay was hectic, with her 10 steps ahead wherever we went. I tried to pretend I could keep up with her–it made me feel normal–but it was pointless. She was always in a hurry, like she was having a race with her bucket list.

She left when the week was up, and I was invited to my son’s house to chill out and have chicken soup with non-gluten matzah balls. You’d think non-gluten matzoh balls would be a set up for a joke, but it’s not. 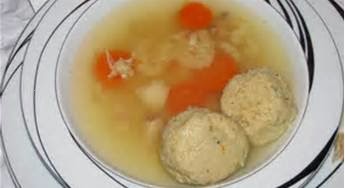 Nothing is funny here, both before the non-gluten matzah balls or after. By the way, I couldn’t tell the difference between non-gluten and gluten. All matzah balls taste the same. The thing that matters is the weight of the matzah balls. My ex-mother-in-law’s matzah balls were like tiny bits of mortar, hard and dangerous if they were airborne, but I digress.

I traveled up my son’s path with him right behind me. And then I caught my foot on the lip of the step and I fell backward. Fortunately, my son was there to catch me, but not before I skinned my knee and my elbow, and telling my son, once again, that I was incapable of grace. I went into his house, had the soup, and went back to my apartment. 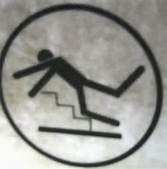 Here’s where the strange part comes in. In summary, I went into his house and an hour and a half later, walked back to the parked car that was across the street. I walked up the outside 4 steps to my apartment, up 4 steps again inside to get to the elevator, and down a long hallway–maybe a hundred feet–to enter the apartment. I went to the bathroom, brushed my teeth, and went to bed. I got up in the morning (here’s it is–the mind-boggling part), went to the bathroom, and as I stood up, my stroke-affected leg collapsed like it was made of straw. Fortunately, I didn’t hit my head as I careened into the bathtub.

So there I was, on the bathroom floor, but luckily, I had Life Alert. You know, “I’ve fallen and I can’t get up” commercials? So I pressed the Life Alert button and shortly, two paramedics were standing in my bathroom doorway. The maintenance man let them in.

One paramedic said, as he helped me to my feet, “Your choice. You can go to the hospital or not. You’re not hurt, as far as I can tell. But you never know.”

I thought about it. My foot just collapsed. Was I tired from the hectic-cousin visit? Or maybe there was something else wrong. Or maybe it was the combination of both. If I was a betting gal, I’d go with the latter. And I didn’t have an option.

So I took a ride in the ambulance and went to the closest hospital. They kept me overnight, what they called “observation mode.” When they took an x-ray of my ankle and upwards, the orthopedic surgeon said that nothing was broken, but my foot ballooned to thrice its size, bright red, and swollen, and when the doctor pushed it, his fingerprint impressions remained.

“Maybe I broke my toe again. I mean, there has to be some reason that I walked on it yesterday and this morning, my foot collapsed,” I intentionally whined.

The doctor said, “We’ll x-ray you toes,” in a snarly fashion, like he didn’t like me telling him his business. 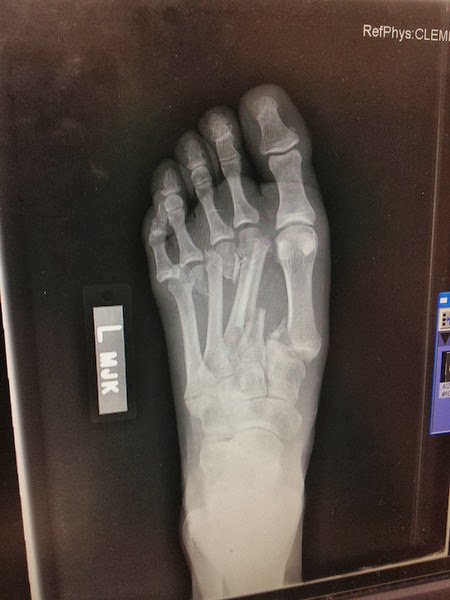 “Too bad,” I said to myself. Most doctors in the universe are like that, at least in my experience.

The x-ray happened a short while later, but at this point, I couldn’t even put any pressure on my foot. The doctor came in with the results in a half hour.

“You fractured the second and third metatarsals.” He looked down at the floor. He couldn’t get over the fact that I was right. “We’re going to transfer you to a different hospital that has more physical therapists than here,” the snooty doctor said, who still had an attitude. He was sneering, or maybe that was my imagination.

So I went to a different hospital and just as the physiatrist said, I got rehab 7 days for around 30 hours a week. I stayed there for 3 weeks and then it was time to go back to the apartment. Even though I enjoyed the therapy, I had enough.

My fractures healed to the day the doctor predicted, 4 weeks later. And I was happy that I had instructed the doctor to do what made sense. Sometimes doctors and other health professionals don’t listen to the patient, as it was in my case. Hell. I wrote a book about that very thing.
———
Not to miss an opportunity:
My book, “The Tales of a Stroke Patient,” is available online everywhere, like:

Joyce Hoffman is one of the world's top 10 stroke bloggers according to the Medical News Today. You can find the original post and other blogs Joyce wrote in Tales of a Stroke Survivor. (https://talesofastrokesurvivor.blog)
[email protected]
http://talesofastrokesurvivor.blog
Previous post My Personal Evolution, aka As It Turns Out, She Was Not “All That”
Next post Distractions, Disablements, Displeasers, aka Whew! There Are Others!

2 thoughts on “Fractured Bones and a Doctor with an Attitude”