Ok. So you had a stroke, and now the drama is over? Wrong! As I always say, having a stroke is the easy part compared to what comes after. There are 7 conditions named here.

In an article in Psychiatric Times, the drama is simply unfolding.

The researchers say the most commonly reported of these in the studies are:

1. post-stroke depression (called PSD as opposed to PTSD ((Post Traumatic Stress Disorder)) which ALL stroke survivors have) and

2. post-stroke dementia (PSDem), which may affect mood and cognitive symptoms. The researchers say that assessment of the survivor’s living situation, level of support, and attention to caregivers’ and family members’ behavioral observations are necessary with patients who have cognitive impairment or other neurologic impediments to communication.

A higher risk of PSD has been found in patients with “left-sided cortical and basal ganglia lesions and to lesions closer to the frontal lobe than to left posterior or right frontal lesions.” (This is why I say–all the time–to get as much information from your doctors as possible in regard to what exactly happened to your brain).

PSD may involve a spectrum of mood disorders,  “vascular depression,” and dementia-related depression. (Vascular depression often predating stroke is associated with higher degrees of cognitive impairment). Because these relationships between depression and dementia are currently vague, the physician should offer treatment of PSD early in the post-stroke period to strengthen mood and cognitive function.

Most reviews have found the risk of PSD to be between 20% and 79% for up to 18 months post-stroke, and the risk of depression is nearly twice that in persons who have not had a stroke. Untreated patients are at risk for chronic illness (even after 2 years) although patients with PSD may recover spontaneously within 12 months with tricyclic antidepressants (TCAs), selective serotonin reuptake inhibitors (SSRIs), and psychostimulants (methylphenidate).

PSDem symptoms include poor social judgment, amnesia, cognitive disorganization, language deficits, apraxia, disinhibited and/or unsafe behavior, paranoia, and visual-spatial dysfunction. Thoughts of suicide have been reported up to 24 months after stroke. Patients with PSDem should be followed up monthly, with reassessment of cognitive examination, repeated depression inventory, and screening for psychotic symptoms. 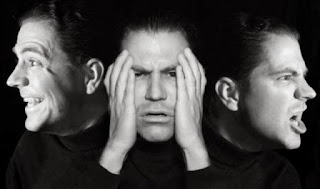 3. Post-stroke mania is rare, but it may be associated with right-sided stroke. Manic symptoms include decreased need for sleep, expansive and/or irritable mood, increased goal-directed activity, disregard for social constraints, recklessness, talkativeness, racing thoughts, excessive laughter or giggling, and poor judgment. Persons with post-stroke mania should routinely be referred for psychiatric care.

4. Anxiety symptoms include episodes of panic, excessive sweating, worrying, and decreased sleep. Risks of 26% for men and 39% for women have been found in a post-stroke anxiety disorders study. A combination of anxiety and depression may be more usual in left cortical stroke, while depression without anxiety may be more usual in left subcortical stroke.

Here’s a tip: Avoidance of benzodiazepines is important. These agents may cause cognitive decline, verging on PSDem. Follow-ups should be done in monthly increments.


5. Pathologic laughter and crying are sometimes grouped as pathologic emotions (PE, another name for PBA) with sudden bursts of either laughter or crying, despite of the mood state.

6. Apathy in the absence of depression may be difficult to evaluate, but it’s a complete lack of initiative without tearfulness, sleep/appetite disturbance, hopelessness, or suicidality.

The use of psychostimulants for PSD or apathy, sometimes both, may be associated with a risk of seizure and/or cardiac side effects. Concern for these risks must be balanced against undertreatment of PSD. In cases of cardiac disease, consultation with a cardiologist is best with careful dosing of psychostimulants.

Having a stroke is the easy part. It’s what comes after that’s usually a bitch.

Joyce Hoffman is one of the world's top 10 stroke bloggers according to the Medical News Today. You can find the original post and other blogs Joyce wrote in Tales of a Stroke Survivor. (https://talesofastrokesurvivor.blog)
[email protected]
http://talesofastrokesurvivor.blog
Previous post Why You Lose Memory from Brain Injury and Possible Ways to Improve It
Next post Incontinence for Stroke and Other TBIs: Well, SOMEBODY Had to Write About It and It Might As Well Be Me

9 thoughts on “Having a Stroke Is Easy: It’s What Comes After, aka Post-Stroke Psychiatric Syndromes”

Stroke Survivors: R U OK? and More–Conversations About Suicide

Depression, Anxiety, and Brain Injury : It’s So Much More Than the Blues