Stay with me here. Long albeit necessary introduction ahead regarding the first source in English of “It is what it is.” The earliest known written reference dates back to 1949 when the phrase appeared in a column written by J. E. Lawrence in the Nebraska State Journal:

“New land is harsh, and vigorous, and sturdy. It scorns evidence of weakness. There is nothing of sham or hypocrisy in it. It is what it is, without an apology.”

It is what it is. I use that expression, too, a lot, regarding my  stroke pain. I always have a mild sensation, rarely severe, in my affected leg, so much so that now I don’t even regard it as pain, just an annoying tingling. It’s become the way it is (see, again), at times forgetting about it. And now I discovered relief. Welcome to the world of Cannabidiol!

I attribute the following information to Harvard Medical School:

Cannabidiol (CBD) has been recently covered in the media, so what exactly is CBD? CBD stands for cannabidiol, and it is the second most prevalent of the active ingredients of cannabis (marijuana). While CBD is an essential component of medical marijuana, it is gotten directly from the hemp plant, which is directly related to the marijuana plant. While CBD is a component of marijuana (one of hundreds), by itself it does not cause a “high.”

According to a report from the World Health Organization, “In humans, CBD exhibits no effects indicative of any abuse or dependence potential. To date, there is no evidence of public health-related problems associated with the use of pure CBD.”

CBD is easily available in most parts of the United States, though its exact “legal” status is in limbo. All 50 states have laws legalizing CBD with varying degrees of restriction, and while the federal government still considers CBD in the same class as marijuana, it doesn’t make a habit to enforce against it. In December 2015, the FDA eased the regulatory requirements to allow researchers to conduct CBD trials.

Forbes says once associated into the arena of Controlled Substances Act for nearly 50 years alongside heroin, LSD, and marijuana (or cannabis), the non-psychoactive relative of marijuana–CBD–cannot get you stoned like weed, and it is defined by the federal government as containing not more than 0.3 percent THC, the “getting high” part of cannabis.

In numerous studies, CBD was able to reduce the number of child and adult seizures, in some cases stopping them totally. Recently, the FDA approved the first time ever, cannabis-derived medicine for these conditions, Epidiolex, which contains CBD. 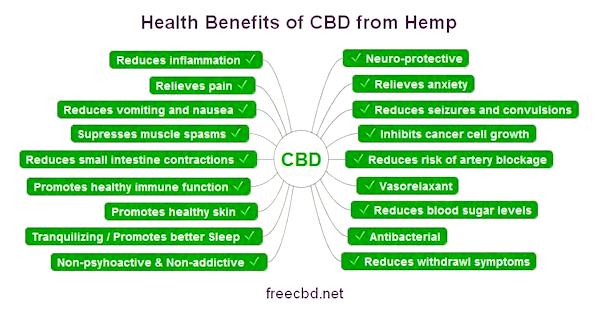 CBD relieves anxiety, insomnia, (with both falling asleep and staying asleep), and pain, and a variety of other conditions seen in the chart above.

The side effects of CBD include nausea, fatigue, and irritability, and can increase the level in your blood of the blood thinner Coumadin, resulting in bleeding.

A significant safety concern with CBD is that it is primarily sold as a supplement, and the FDA does not regulate the safety and purity of supplements. However, it can also be added to a number of non-edibles and used topically, like balms and lotions.

The researchers need more data, but CBD may be proven an option for managing anxiety, insomnia, pain, and other ailments. It’s true that CBD is currently mostly available as an unregulated supplement, and it’s difficult to know exactly what you are getting. If you decide to try CBD, talk with your doctor to make sure it won’t have an adverse effect on other medications you are taking.
Natural Stacks says that CBD comes in many forms:
Products containing CBD oil are widely available, even on Amazon. You can find it, for example, in capsules, creams, or gummies.
As mentioned before, anyone can make a CBD supplement without formal regulation or testing. Even though the cannabis industry is thriving, until there is official regulation and control of CBD, you should do your research to have an absolutely clear knowledge of what you’re buying.
Ask questions to the vendor:
A trusted company should be able to produce a Certificate of Authenticity on the label, provided by an accredited laboratory.

There’s also CBD wax which comes in different forms, and may be called shatter, live resin, crumble, or budder. It’s manufactured by treating the extract so that it becomes crystallized.
Dabbing CBD wax is exceptionally potent and can provide instant relief from problems, but you should use it cautiously as it’s concentrated.

I can’t ingest (take by mouth) CBD because I’m on the blood thinner Coumadin, but I’ve used a CBD lotion locally from Amazon called Hemp Cream 1000 which helps my leg temporarily from that awful tingling. Again, check with your doctor before using any CBD products. I did, and now constant relief!

Joyce Hoffman is one of the world's top 10 stroke bloggers according to the Medical News Today. You can find the original post and other blogs Joyce wrote in Tales of a Stroke Survivor. (https://talesofastrokesurvivor.blog)
[email protected]
http://talesofastrokesurvivor.blog
Previous post Can Brain-Injured People Ever Achieve Prolonged Happiness, aka MY List Doesn’t Have to Be YOUR List
Next post Stroke Survivors: Too Much Body Weight More Than Likely Means Failed Rehab Expectations at Some Point

Can Hypnosis Improve Me as a Stroke Survivor to the Point Where I Could Abandon My Cane? Read What the Hypnotists Told ME!