Skip to content
Education
Spread the love
You don’t do it for you, stroke survivors. You already had a stroke. You’re thrilled for them, the loved ones who come after. But don’t get too excited. Researchers have been only experimenting on mice and dogs so far. But if these results translate to humans, FDA approval is likely. Imagine reducing the side effects of stroke by restoring oxygen to the brain with an intravenous injection that has an oxygen carrying drug molecule so small it passes through the clot like water passes through sand.  It would be administered as soon as side effects appear and should have no downside effects if it’s deemed safe. Many possibilities for the drug exist like stroke. Tissue oxygenation is possibly coming your way and quite soon.
Mike Sheikh, with a pedigreed degree, a Pharma consultant, and a load of smarts, shared this with me. Here is the fascinating discovery authored by Mike Sheikh himself.
—————–
Extending the Golden Hour for Stroke Victims
Researchers refer to the first hour from the onset of stroke symptoms as “the golden hour” because “time lost is brain lost.” The sooner the patient gets in the que to get a diagnosis for the type of stroke, the better the outcome.  Diagnosing a stroke is as simple as FAST which stands for Face, Arms, Speech, and Time.  The time it takes to identify the patient is suffering from a stroke is only 1 minute, but the paradox is that treatment cannot begin until imaging is complete and the doctors have ruled out a hemorrhagic stroke.

According to a UCLA research study the average time from onset to treatment is 2.5 hours.  Ischemic strokes which account for 87% of all strokes can be treated with a powerful clot busting drug called Tissue Plasminogen activator (tPA).  Ethics dictate that doctors can do no harm.  This means that even though there is an 87% chance that tPA will bust the clot and stop the brain from dying, medical professionals have to sit on the sidelines while the brain deteriorates until the diagnosis is complete.  If any hemorrhagic patients were given tPA, they would surely die.

Average Stroke Patient Experiences Almost a Decade of Brain Aging Before Treatment
The focus to reduce the time to diagnosis is critical with respect to brain aging.  Patients receiving treatment sooner than 2.5 hours had a better ability to walk, live independently, and had reduced mortality.  The clinical benefit of tPA was best used before 4.5 hours of onset.  Studies have shown that an ischemic stroke consumes almost 2 million neurons ever minute until blood flow is restored.  This translates into 14 billion synapses lost and 7.5 miles of myelinated fibers lost every minute and accelerated aging of the brain by 3.1 weeks.

In a typical stroke scenario 30 minutes is spent getting to the hospital which results in a brain aging of 1.8 years and then the additional 2 hours to get imaging results in another 7.2 years of aging.  This brings the total aging of the brain to 9 years in the average stroke case.  The indirect cost of stroke care in terms of lost productivity and care taking is estimated at $22.0 billion annually. 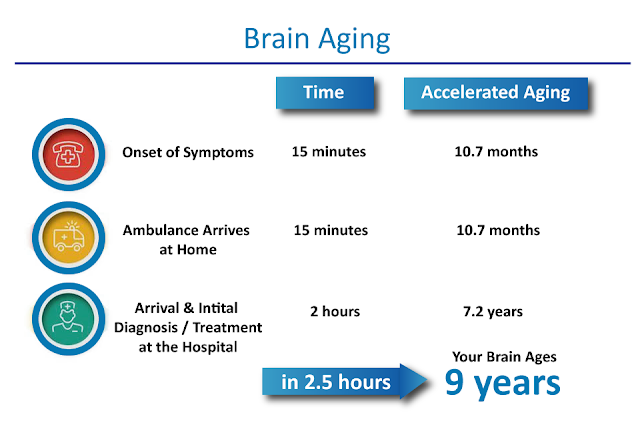 Fast Treatment Has Medical Benefit
Researchers also found that faster treatment results in better outcomes. They have quantified that to mean that for every 15 minutes knocked off the time to treatment results in a 4% greater chance of walking, 4% less likely to have a brain hemorrhage, and 4% are less likely to die. Putting this into perspective, if brain tissue oxygenation could be restored in 15 minutes, there is a 40% great chance of walking.
Blood Clots are Actually Porous and Not Impermeable Barriers
The crux of the problem during a stroke is getting oxygen to the effected brain tissue.  The only transport mechanism to the effected brain tissue are through the arteries blocked by a blood clot.  Blood clots, however, are not solid impermeable barriers and are more like fish nets full of fish (blood cells) that will allow smaller molecules and fluid to pass.  So when the road is closed to large oxygen transporting vehicles like the red blood cells, they are still open to the much smaller co-polymers in the blood plasma that pass without consequence.  When these arteries start to form clots, they are exacerbated by fibrins that eventually form a net that ends up trapping more red blood cells.  Fibrinogen is normally dissolved in blood plasma and through a cascade of interactions generates thrombin which converts the fibrinogen in the blood plasma into long strands of fibrin that radiate from the clumped cells designed to trap more blood cells.  [Bottom line:] Instead of breaking up the clot, the simpler solution is to try to get an oxygen delivery vehicle that is small enough to pass through the clot.
The Oxygen Bridge 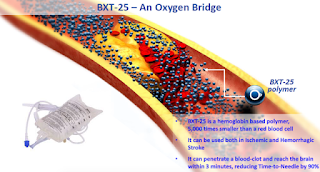 The key to overcoming the blood clot in the brain is to think small.  This is where BXT-25, a developmental drug that is 1/5000th the size of a red blood cell, might have the right idea.  BXT-25 is a combination of Heme (from hemoglobin) and a co-polymer designed to stabilize it in the bloodstream.  BXT-25 can stay active in the blood for up to 9 hours.  Heme is the chemical structure that carries oxygen and is the fundamental building block of the human body’s oxygen transport system.  It is injected intravenously and then circulates within 3 minutes through the blood stream and picks up oxygen in the lungs and transports it to various tissues and organs including the brain.

The concept behind this drug is to allow a first responder to give a stroke patient an oxygen bridge until imaging can identify the type of stroke and apply the treatment. [No matter what kind of stroke!] Providing this oxygenation has no downside risk regardless of the type of stroke, unlike the tPA, which could kill a hemorrhagic stroke victim. Getting this vital oxygen to the brain could dramatically improve patient outcomes and greatly reduce the amount of recuperation time from a stroke.

BXT-25 could break the paradigm of the golden hour and put this lifestyle-saving drug in the hands of first responders much like the AED improved outcomes for patients undergoing cardiac arrest.
BXT-25 [BXT stands for the name of the company, Bioxytran] could be a game changer in the treatment of stroke patients.  The drug is currently under development and is NOT FDA approved.

For more information on how it works visit the website or play this video of how it works.
—————–
Remember to click on the links to the website and video. Again, it’s only being tested on mice and dogs, but that discovery is huge if the results translate to humans. Mike thinks that FDA approval could occur within 2 years.

And keep this in mind. Prof. Avraham Mayevsky, on the Advisory Board of Bioxytran, is a worldwide authority in the field of minimal invasive monitoring of tissue and organ physiology, a professor in Israel at the Faculty of Life Sciences, Bar-Ilan University.

Final point: Again, many of my readers already had a stroke. But stroke can be hereditary. So think of them!

Joyce Hoffman is one of the world's top 10 stroke bloggers according to the Medical News Today. You can find the original post and other blogs Joyce wrote in Tales of a Stroke Survivor. (https://talesofastrokesurvivor.blog)
[email protected]
http://talesofastrokesurvivor.blog
Previous post The 10 Most Read Posts Since My Blog First Appeared 10 Years Ago
Next post Stroke Survivors Like Us With Aphasia: One Son’s Everlasting Love for His Mother

4 thoughts on “Oxygen Getting to Brain Cells Is the Problem During Stroke, But Wait! There’s Possible Relief Heading Your Way!”