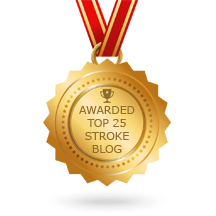 I love to blog. (And I won two awards–one from Medical News and the other from Feedspot). It’s a catharsis in a way, defined by Merriam Webster as the purging of emotional tensions, relieving oneself of the feelings that through catharsis, arise to the surface. In the 10 years my blog, The Tales of a Stroke Patient and More, has been alive (as opposed to “live” which in my mind doesn’t have the same impact), I have always liked to bring you, my dear readers, thought-provoking and inspirational tales to keep your mind working.

There is a counter when you write for Google’s Blogger which shows, among many other things, the 10 most read posts to date. I hope you gain something from them if reading for the first time, or re-read them for reinforcement, published around the world in every continent except Antarctica. (I’m starting to wonder if anybody even lives there!) Here they are in order:

A Place for EVERYTHING Stroke and Other TBIs–strokefocus.net

This is the story of amazing Daniel Gu and how he founded Strokefocus.net, the completed website coming in June. It’s a touching, almost tear-producing process of his recovery.
http://stroketales.blogspot.com/2016/10/a-place-for-everything-stroke-and-other.html

Alcohol and Stroke: You May Be Just Asking For It

This post created some brouhaha because people took offense that it was directed at them instead of thanking me for the information. Oh, well. No good deed goes unpunished.
http://stroketales.blogspot.com/2016/09/alcohol-and-stroke-you-may-be-just.html

The Words I’ve Been Longing To Hear: An Energizing Visit from the Cable Guy

Don’t get any ideas of an intimate nature! We were just having a conversation. That was the first time the cable guy and I spoke without asking me to repeat myself. The post has near-comical elements.
http://stroketales.blogspot.com/2016/09/the-words-ive-been-longing-to-hear.html

Fatigue and Stroke, aka I’m Hittin’ the Wall

The world is filled with acronyms, and this post follows suit.  It’s called PSF, Post Stroke Fatigue, and explains possible reasons for PSF and the foods that combat it.
http://stroketales.blogspot.com/2014/05/fatigue-and-stroke-aka-im-hittin-wall.html

(6,717 readers)
The thinking was I was allergic to Heparin which isn’t an allergy at all. As a result, the doctor finally took away every blood thinner. The right thing to do? Not really, I learned much later on.
http://stroketales.blogspot.com/2014/07/how-two-legal-drugs-caused-my-stroke.html

(5,964 readers)
When it comes to caregivers, they are passionate about the position whether they are burned out or lovingly embrace it. But GFYS? That came from one of the burned out ones.
http://stroketales.blogspot.com/2017/02/the-caregivers-are-venting-and-stroke.html

Can’t Do’s and Can Do’s: A Stroke Survivor’s Thoughts

Thoughtless Person: You Didn’t Finish the Book YET? Stroke Survivor: No, Dumbass. Remember? I’ve Had a Stroke!

(5,339 readers)
Dyslexia and aphasia are only two of the subjects discussed. I read slower now, but I read, and other disorders are included. That title, by the way, happened to me.
http://stroketales.blogspot.com/2016/04/thoughtless-person-you-didnt-finished.html

Ten Things NOT to Say or Do to a Stroke Patient

(5,274 readers)
Insensitivity is at the heart of this post. After I wrote this post, some other bloggers copied the title. I didn’t mind because that’s stroke awareness, front and center.
http://stroketales.blogspot.com/2015/02/ten-things-not-to-say-or-do-to-stroke.html

Sex and the Stroke Survivor: A Case of Futility?

(5,046 readers)
Sex is very important to some people, but after they had a  stroke, not so much anymore. Tips on how to do more are included with illustrations even. Hoo-hah.
http://stroketales.blogspot.com/2016/04/sex-and-stroke-survivor-case-of-futility.html

Joyce Hoffman is one of the world's top 10 stroke bloggers according to the Medical News Today. You can find the original post and other blogs Joyce wrote in Tales of a Stroke Survivor. (https://talesofastrokesurvivor.blog)
[email protected]
http://talesofastrokesurvivor.blog
Previous post Life and Death, the Great Equalizers
Next post Oxygen Getting to Brain Cells Is the Problem During Stroke, But Wait! There’s Possible Relief Heading Your Way!