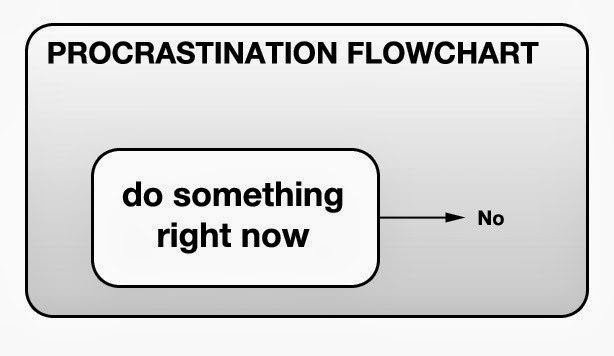 I was scared of anything medical, even way before the stroke. I waited 8 years to get a sinus operation, 10 years to get a colonoscopy, and 11 years to get hearing aids. Then I broke my shoulder in December, but my upper arm was still swollen five months later. And, of course, I was worried. Could it be blood clots again, this time in my arm, closer to my heart? So I decided, at last, to take action. Five months. I’m improving with age.

I went to the local imaging center in May, a chain that specializes in mostly MRIs, CT scans, ultrasounds, and X-rays. The technician scanned my arm with an ultrasound and told me that I didn’t have clots. The doctor verified the result in a letter. But what no one told me was the technician went up too far and scanned my thyroid, too. A few weeks later, I got another letter, recommending a biopsy because my thyroid had eight nodules, seven of them too small to worry about. The eighth one gave the doctor concern. I made another appointment as soon as possible which translated into three weeks, but a little background first on cancer and biopsies.

Nodule. Carcinoma. Tumor. Malignancy. Lesion. I call it the “C word.” But no matter what you call it, cancer is cancer. I thought I had it from all the X-rays and CT scans over the last three, stroke-related years. Today, after the smoking PSAs and warnings on the cigarette packs, and a lot of pink depicting Breast Cancer Awareness, more than a million cancer deaths have been avoided in two decades. Even so, there is still cancer.

The American Cancer Society says that cancer deaths in the U.S. continue to go down for lung, colon, breast,  and prostate cancers, which are responsible for most cancer deaths. However, some of the less common cancers have been on the increase in the past decade, including pancreas, liver, kidney, and thyroid cancer. 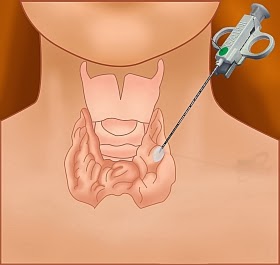 A biopsy, a sample of tissue taken from the suspected site, is done in order to scrutinize it more carefully. Biopsies are done when an initial reading suggests an area of tissue looks suspicious on an imaging test. Lest you think I am straying from the issue at hand, here’s the reality: most often, biopsies are done to look for cancer.

So there I was, an uncomfortable stroke survivor, lying prone on a table and staring up at the ceiling, waiting for the biopsy to begin. I started to count the square tiles, count the lights, count the square tiles again. When the radiologist came into the examining room, as I was silently planning my funeral and after-party, the doctor showed me the needle (most commonly used on all biopsies) he would use to remove a small amount of thyroid tissue with the assistance of numbing medication and an ultrasound to identify the nodule.

“You will probably be sore after the biopsy, but the soreness should just last for a few days. Use an ice pack initially, 20 minutes on, 20 minutes off, and take Tylenol, and if the site becomes swollen and/or hot, you can call us at any time. A doctor is always on call,” the radiologist said. “There will be three samples taken, one at  a time.” I started planning the inheritance for each of the kids.

The biopsy was over in a few minutes and I took a nap when I arrived home. The pain that would “last a few days” lasted a week, with the intensity getting weaker every day. Mostly, I had a sore throat.

The radiologist sent me a report of the findings in another two weeks, and all it said was “abnormal tissue.” The report also recommended a biopsy again in three months. So, of course, I wanted a second opinion. A doctor friend recommended an otolaryngologist who specialized in thyroids. So I went to see him. The “oto” recommended Veracyte, a thyroid testing company, that goes the extra mile to test the sample completely. The sample was sent to San Francisco where Veracyte is based, the land of the “Big One,” (referring to an earthquake forecast recently for the San Andreas fault that could end up being bigger than earthquake experts previously thought).

According to the Veracyte literature, the test “measures the amount of activity of 142 genes in the thyroid nodule…to be performed only when cytopathology (the examination of cells used to diagnose nodules) is indeterminate.” “Abnormal cells,” the diagnosis on the first report, was about to get a re-do.

Three months later, I went to get another biopsy, this time with four samples, and again one at a time. The biopsy, like the other one, took a few minutes. I knew the drill by now. Ice pack on and off, Tylenol, nap, and the sore throat for a week. The results letter arrived two weeks later. I was glad the “Big One” didn’t hit yet. The letter said that no evidence of cancer was found because the nodule was benign.

Look at all the time I wasted, worrying about thyroid cancer. Three weeks to the first biopsy, then three months to the second biopsy, and then two weeks longer for the results to come. I couldn’t get the time back, but once again, a lesson learned: don’t worry until you know.

I think I need a root canal. No more delaying, I decided. I’m going in four months–tops.

Joyce Hoffman is one of the world's top 10 stroke bloggers according to the Medical News Today. You can find the original post and other blogs Joyce wrote in Tales of a Stroke Survivor. (https://talesofastrokesurvivor.blog)
[email protected]
http://talesofastrokesurvivor.blog
Previous post Where the heck is the blog, “The Tales of a Stroke Patient”?
Next post Elliptical Timeline

One thought on “The Cancer Scare”