I got a brain bleed 10 years ago and I wasn’t supposed to live. I had Protein S Deficiency that gave me blood clots and didn’t know it for over half my lifetime until I was diagnosed with a hemorrhagic stroke. The neurosurgeon didn’t operate because the chance that I would have survived the operation was zero, having thick and plentiful clots in every extremity. Instead, I was put on Warfarin, another name for Coumadin, and here I am, a decade later.

A little background first. The only restrictions with Warfarin are too much Vitamin K intake, like lots of cranberries, broccoli, or leafy green vegetables. The most important thing with Warfarin is to stay consistent. By staying consistent, the doctor knows how much Warfarin to give me through a prothrombin time (PT), a test used to detect a bleeding or clotting disorder and the international normalized ratio (INR) used to monitor how well the blood-thinning medication called anticoagulant is working. I take blood tests frequently and I am stable. 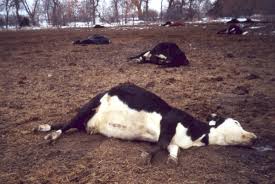 A long time ago, in the late 1920s, the cattle and sheep in North America and Canada were dying from fatal bleeding, blamed on mouldy silage, (a method used to maintain the pasture for cows and sheep to eat later and stored in the silos when natural pasture isn’t beneficial, like in the dry season).

The cattle and sheep had grazed on sweet clover, a kind of hay. Hemorrhaging occurred usually when the climate was damp and the hay had become moldy. Tough times in the 1920s meant that farmers could not afford a replacement, so the hemorrhagic disease became known as “sweet clover disease.”

There were only 2 solutions, according to veterinary surgeons: destroying the moldy hay and having a replacement or transfusing fresh blood into the bleeding animals which was called “plasma prothrombin defect.”

But everything comes down to money, and even though the farmers were told not to feed the moldy hay, they did not follow the recommendation, and sweet clover disease remained, even a decade later.

By 1940, Karl Link, a biochemist, and his colleagues came upon a natural substance called coumarin, better known as dicoumarol from the sweet clover and was used as an anticoagulant, albeit an iffy one. The work was fully financed by the Wisconsin Alumni Research Foundation (WARF), who were given the patent for dicoumarol in 1941.

But in 1945, knowing that dicoumarol was a lengthy process in thinning the blood, Link considered using the coumarin derivative Warfarin as a rodenticide which had the reverse effect–slow bleeding until the little suckers bit the dust. Bleeding in who-cares-about-rodents fit the bill, and the compound was named Warfarin after the funding agency. It was marketed in 1948 as a rodenticide, and warfarin still exists today as both a rodent killer and a blood thinner.

In 1954, Warfarin became known as the go-to anticoagulant under the trade name Coumadin, and was approved for use in humans and, of course, rodents. But in humans, when there was still too much bleeding, Vitamin K foods reversed the effect. And too much Vitamin K led to clots. That is why I have to stay in the INR range of 2 to 3 when I get tested–above 3 could lead to bleeding and I have to take more Vitamin K; under 2 could lead to blood clots so I have to decrease my Vitamin  K. Thus, I get tested every other week.
The mechanism of Warfarin was not discovered until 1978, when John W. Suttie and colleagues, in an “Aha moment,” proved that Warfarin alters Vitamin K by slowing down the enzyme epoxide reductase, known as VKOR, which is highly sensitive to Warfarin, the most commonly prescribed anticoagulant.

There it is, folks, as easily as I could say it. My trademark is, Know a little bit about a lot of stuff and you’ll get by fine. And here I am, writing another blog. Who figured!

Joyce Hoffman is one of the world's top 10 stroke bloggers according to the Medical News Today. You can find the original post and other blogs Joyce wrote in Tales of a Stroke Survivor. (https://talesofastrokesurvivor.blog)
[email protected]
http://talesofastrokesurvivor.blog
Previous post A Christian Inspires a Jew to Believe in God Once Again
Next post Stroke Survivors: Stay Away–Mayhem, Mishaps, and Murder on Black Friday

4 thoughts on “Warfarin: A Blood Thinner and Rat Poison Shouldn’t Be in the Same Sentence”