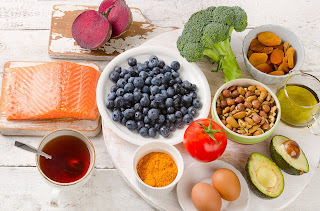 Ryan Gosling, the famous actor, once said, “There’s something messed up with my brain.”

I say, “Get over yourself, Ryan. There’s something messed up with everybody’s brain,” (albeit some more than others). How can there not be? The brain has 3 main parts, and the Cerebrum alone is the largest part that performs higher functions like interpreting touch, vision and hearing, as well as speech, reasoning, emotions, learning, and fine control of movement including our decisions to get up or not, to lavish ourselves or not, to push ourselves to exercise or not. It’s only a matter of time until something goes awry with everybody.

So with all this power that the human brain possesses, we should feed the brain correctly, especially with stroke or traumatic brain injury survivors, trying our hardest to save what’s remaining.

The saying “You are what you eat,” often said, has an interesting route. Here are the most notable:

“Dis-moi ce que tu manges, je te dirai ce que tu es.”
[Tell me what you eat and I will tell you what you are].

In an essay titled Concerning Spiritualism and Materialism, Ludwig Andreas Feuerbach, in 1863, wrote:

Later on, in the 1920s, Victor Lindlahr, a nutritionist, linked good food to health, and developed the Catabolic Diet, still in effect today that require more energy and contain negative-calorie foods, like blueberries, broccoli, and white meat chicken or pork. Proponents of the Catabolic Diet say that if your diet is primarily made up of these foods, you’ll lose weight even as you eat more. “Ninety per cent of the diseases known to man are caused by cheap foodstuffs. You are what you eat,” said Lindlahr.

So interestingly enough, I reviewed 12 sites that all screamed, “Here! The 10 best brain foods!” and except for nuts/seeds, salmon, and dark chocolate, the most repeated (1 through 7) are all on the Catabolic Diet and are considered negative calorie foods, meaning go ahead and eat all you want. (Prediction: At first, you’ll be delighted to eat 1 through 7 unendingly. But before the week has ended, I think you’ll come to a limit on just how much you can eat limitlessly without turning green and having “bathroom” problems from 1 through 7. Just sayin’.)

The 10 best foods for brain health are:

Side note: Sodium, sugar, refined carbohydrates, and processed foods are all curbed on the Catabolic Diet. While you’re on the diet, you’re instructed to eat breakfast, lunch, and dinner every day and to drink plenty of water, though not when you’re eating your meals. Drink water half an hour before meals and as much as your body can handle after meals. Coffee and tea are allowed, but only before or after, the same as with water. If you get hungry between meals, Lindlahr said to munch on raw celery.

I don’t want to end before saying I’ve tried all the foods of this “best brain foods” list as part of my daily regimen for 3 months. As a stroke survivor, I ate differently before. I’ve noticed that my memory is better, both short and long term, and my ability to concentrate and focus on one thing at a time have improved. My frustration levels have dropped and I have less anxiety now. It took me a while to notice my improvements and, in addition, I’ve given up dairy and feel less sluggish, too. It’s my imagination? Well, who cares! I feel better and that’s what counts.

If you try the 10 best brain foods consistently, let me know if you see an improvement. My email address is [email protected]. Bon appetit!

Joyce Hoffman is one of the world's top 10 stroke bloggers according to the Medical News Today. You can find the original post and other blogs Joyce wrote in Tales of a Stroke Survivor. (https://talesofastrokesurvivor.blog)
[email protected]
http://talesofastrokesurvivor.blog
Previous post Acupuncture Cures What Ails You? “Fallacy Man” Produces Quality Points That Give You Pause
Next post Collecting Data on Stroke and Other Brain Injury Survivors Can Be Simpler When One Problem is Gone